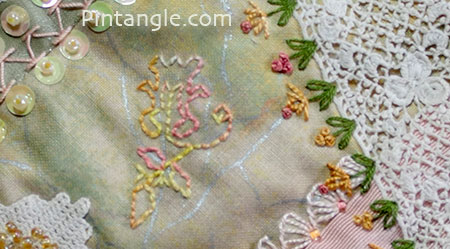 This is a small experiment as on this block I have incorporated a blackwork motif.

The story behind this block is that it is one of the many blocks that act for me as a memento of the year we spent living in England. The little blackwork motif I graphed out on one of my numerous visits to the textile study area at the Victorian and Albert Museum. That year I spent many happy hours graphing out 16th and 17th century samplers hence this motifs inclusion in the block. The colour scheme is because we arrived in England in Spring and it was delightful. We also left in Spring which was harder to take!

The reason I think this technique has sparked my imagination is that any needlework technique that requires an even weave foundation is possible using waste canvas. 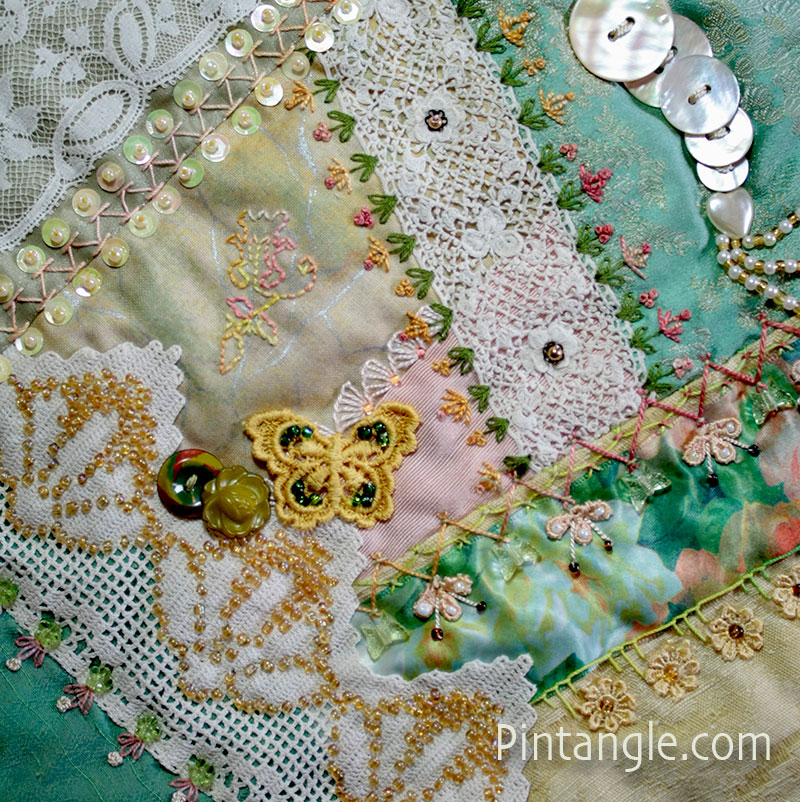 Here is the full block if you click on the photo you will see a larger version.

The lace was found in a little tiny second hand shop in Oxford. We had gone up there on a day trip to see a friend. We took the train and had a bit of time to kill so even though it was a damp day went for a walk around the town. When we stumbled upon this little shop of bits and pieces we went in to investigate pleased of a dry spot. Since it was wet outside we probably poked and prodded more things than necessary. During this investigation I spotted on the floor in the corner under a rickety old chair a shoebox of lace. I investigated further and discovered that in it was what looked like an old wooden broom handle that had been cut off at about a foot. Around it was wrapped pieces of lace. At first I was excited as the roll had the diameter of a tea cup – a lot of lace. This glee lasted until I realised that the lace was pinned in place by pins which had long since rusted. Unwrapping the first piece of lace I thought it dated from about the 50s. It was about 12 inch long and damaged but I thought it could be used. I asked the shop owner how much he wanted for it and we negotiated a couple of pounds. I didn’t want to pay too much but I figured I could use it in Crazy quilting.

Later that evening back in our London flat I started to remove what turned out to be a couple of hundred rusted pins. As I unwrapped the badly damaged lace some of the pieces had little tags on them. The writing long since gone but indicating to me that they were perhaps samples. As I unwrapped further the lace became older and older. I was beside my self when the lace was looking as if it dated to the 20’s and just over the moon when I excavated down to the Victorian era. All of it was badly damaged, torn in some places and all had rust stains but it was usable in CQ. So the fact that it was damaged gave me permission to use it.

After the fires in Canberra I decided that there would be no more hoarding of special bits in my house. I was made very aware of how easy it is to be doing the domestic weekly grocery shopping in the morning going about the humdrum business of living and have nothing but the clothes you stand in by the evening. The fires made an incredible impression on me. One of the things I decided was that I was going to use the stuff I had hoarded for ‘something special’. On the day I grabbed photographs and quilts so I have decided that is it is special a quilt is a good place to keep it! This block is a result of the new philosophy.

Have you enjoyed this article? If so you may be interested in  a tutorial I have written on how to work decorative crazy quilt seams.  When I converted it to a PDF file I realised how comprehensive it was. At 19 pages of information it is a mini ebook and resource worth investigating!

You can have Pintangle delivered to your inbox by using the subscribe feature in the sidebar. Enter your email address, and when you get the confirmation email make sure you respond to be all set!
If you are on a mobile or tablet scroll to the bottom to find the subscribe feature. 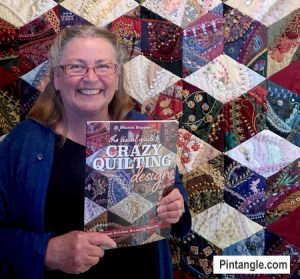 Have you seen my book?

shares practical methods about how to design and make a crazy quilt. I teach how to balance colour, texture and pattern, in order direct the viewers eye. I show you how to build decorative seam treatments in interesting and creative ways using a handful of stitches. My book is profusely illustrated as my aim is to be both practical and inspiring.