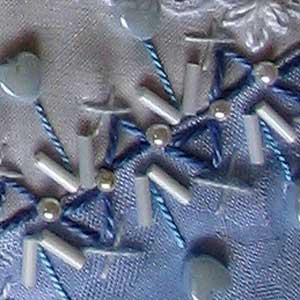 I have decided to start a new series of posts which will run for a 100 days. Each day I plan to post a detail of some stitch, seam treatment or embellishment and talk a little about it. I am calling the series 100 details for 100 days. I will draw on work I am doing or projects I have completed, some of which are not on my site. Looking through the photos I have on my hard drive of both samplers and crazy quilting I realise that some areas are simple to work and other details need quite a high skill level so people of all skill levels should enjoy them.

The idea popped into my head while doing the dishes. (I don’t know why I have my best thinking time doing mundane tasks but I do) Why have I decided to post a detail a day on top of my normal posts? I have left full time 9- 5 work and I wanted to jazz up this blog a little. I have been feeling a little stale particularly since the comments are still not quite working. At the moment they appear in the side bar but not below the post! So following my own philosophy that the more energy you put into something the more you get out of it I decided I would jump in on this. People like eye candy for inspiration so I thought I would share some in a series. By the end of the series people will have a digital sampler of stitches and ideas which will reside in its own category and if they choos people can print them out and keep them in a file or their visual journal.

So first detail is a very simple seam treatment based on an arrangement of straight stitch with bugel beads, small pearls and heart shaped beads added. The stitching is worked in no 5 and no 8 pearl. The row of pale blue cross stitches is worked in a cotton thread similar to no 8 pearl. As a thread it does not have quite the same sheen but has the same weight and I like contrasting thread weight and sheen on seam treatments.

The detail comes from the photo board frame I made Eve.

For those people who swing by for a morning link don’t fear I will still be posting those too. This series is just an added bonus!