Well it is time once again for my weekly report on the state of my WISPs (Works in Slow Progress). As regular readers will know this year I am attempting to work through the pile as part of Sandie’s UFO and WISP challenge.

Progress has been slow as it’s summer holiday time here in OZ and as anyone on the Eastern Coast of Australia will tell you we have had more than a few hot days. That said things should settle a little. Jerry has arrived back from Japan and has posted stories of his travel on his blog including some photos of Kimonos he saw. Jerry has now returned to work so I am re-establishing my regular routine.

While Vivian and Mary were in Canberra last October they suggested that Annie and myself test run one of their Heavenly Embellishment Bliss bags. The idea was to see what did with them. I agreed so this week I pieced the block.

Annie and I were both given a choice of bags and I chose the Peacock bag. These bags retail at $10.00 Australian and each bag contains colour co-ordinated fabrics, a silk print picture, threads, trims and embellishments. 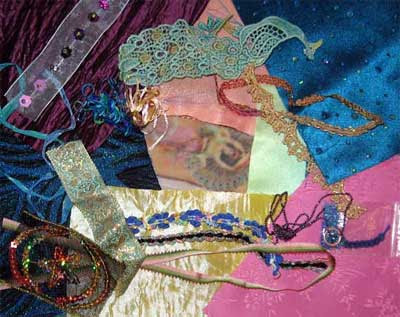 This was the contents of the bag. As you can see its been colour coordinated. Fabrics were mainly synthetics but I happily sew with synthetics so that is not a problem in the least. I particularly liked the dark Aqua metalic fabric. 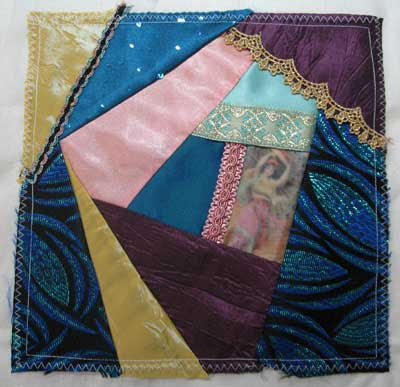 I have assembled this block from the bag. I found there was more than enough material to make an 8 inch block.In Fact I could have easily made a 12 inch block. Since it was already colour co-ordinated it went together quickly. 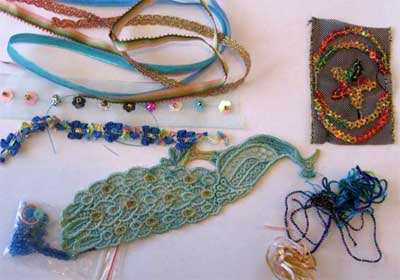 These are the bits and pieces that I will add during hand stitching. I will have to add threads and beads to make the block up as I use a lot of lace, buttons and beads when I embellish. I think its good value for money as I imagine most people would only need to add a little in the way of threads and beads. On the other hand I am not sure I will use all the trims. I guess I will just have to see. So it is a case of stay tuned for my report next week. 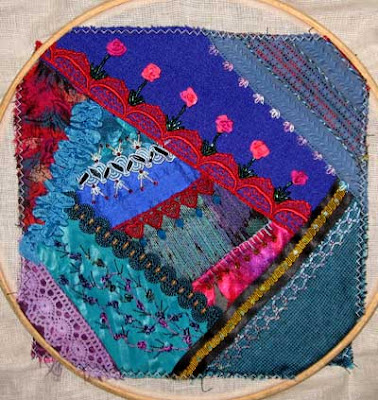 This is what is on the hoop at the moment. Its a block that has sat around quite a long time so this week I picked it up. I have a number of ‘jewel’ tone blocks sitting in that basket which will eventually go together. They have sort of evolved of their own accord. I have decided to chip away at them.

That’s it for the weekly report. Lets hope there is a little more activity from now on!

If you enjoy crazy quilting you might be interested in taking one of my online classes Encrusted Crazy Quilting which starts February 9. All my classes have an emphasis on design but this one in particular covers how to compose, construct and embellish a crazy quilt block. The link leads you to further details