Yesterday a wonderful squishy arrived as a surprise gift from Lynn Schoeffler It truly is a squishie to lust after. Everything in it from the unusual fabrics to the vintage buttons was ‘me’. 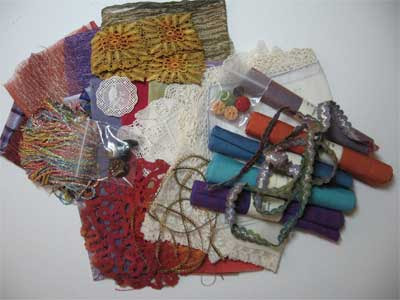 It was nice it set my mind a thinking – and I am not going to even admit to myself where it went as I really do want to complete the diamond blocks. Particularly since Wednesday is normally the day I do my weekly report on the state of my WISPs (Works in Slow Progress) as part of Sandie’s UFO and WISP challenge. I will allow myself to say dream a little in my visual journal and that is it. (Just Watch that promise make a fool of me)

The response from those who are in the TAST challenge to my ‘“leave a comment as you stitch’ system was so positive that I will go with that idea. I will still do general round ups but more as I have time and feel like doing them. I will explain it on the the Take a Stitch Tuesday Challenge but simply put if you stitch sample leave a comment on the stitch challenge page for that week with your URL so people can see it.

Please remember comments are moderated I approve them when I log in. So they are not necessarily immediately seen but will be.

The good thing is that anyone with a site can join in now as I always felt a bit mean asking for blogs/flickr sites only. I feel good about that. Also if you spot something someone else has done that is really unusual and want to highlight do so. The number of comments moderated is no problem its a simple click of a button. I read them all but obviously won’t be able to respond to every one. As long as this is not seen as me being rude i am happy to have as much chat going on as people want.

I do have comments set to close after a period of time but I will tinker with the plugin code and make the period longer. This task and updating the TAST challenge page will have to be done tomorrow because today I head into Uni meetings, check the software software etc before I start teaching on Monday. 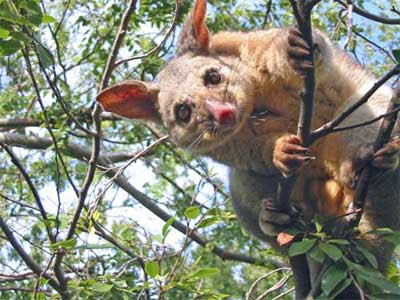 A few years ago I stated that possums are magic well I have decided that although they are cute outside they are not cute when they decide to make their home in our roof.

We have some very noisy and unwanted guests. So yesterday I called the possum man. He is a lovely gentleman who has a very ingenious way of removing such animals. Yesterday after scrambling about he found the hole the possums were using to come and go. In this hole he put a trap which allows them out of the roof area but not back in. It means they depart and hopefully go off and find another home. Although I am worried about this as we lost most of our trees in the fires I think it’s a very humane way to ask them to leave.

Our possum man did warn me that they get annoyed as they are creature of habit. He said they may make a racket trying to get back in. Well in the early hours this tiny animal was making enough noise to make me think we had a team of football players on the roof!

This is a photo I took a couple of years ago of a possum that lived outside my office at the Uni. I thought those international readers might like to know what I am talking about

Well I have to dash – and get into the shower, start the day etc …