This month the challenge is to look at another embroidery style and push it into a direction that may not have been done before. At first glance Assisi embroidery appears to be a very conservative choice until you look at the dominant design element that drives its appeal.  In this style the background of the design is filled with embroidery stitches and the main motif is left void. This is why it is also known as voided work and as silhouette embroidery.

January’s challenge was chicken scratch which has a dominant design element of pattern. Last month’s trellis stitch appeal is the design element of texture. This months challenge to look at Assisi which is a style of embroidery that is based on using both positive and negative space. Once you see this aspect of the style it can act as a springboard  towards a very contemporary design. So the challenge is to use Assisi as inspiration for a small piece.

What we know as Assisi embroidery is a style that was revived early in the 20th century. Today Assisi is often worked in cross stitch outlined in either back stitch or double running stitch blue, green and red as traditional colors, but modern Assisi is stitched in any colour including variegated threads.

Originally this style of counted thread embroidery was named after a city in Italy. Jos Hendricks has developed a site on Assisi Embroidery which houses both patterns and information on the history of the style

For an informed article on traditional Assisi see Stalking the Wild Assisi by Kathryn Newell.

To see more of this style there is a traditional chart provided by La Chatelaine Designs that is available and this page provides some free designs of Assisi style embroidery.

Also there is also this traditional pattern of an Assisi style rabbit. 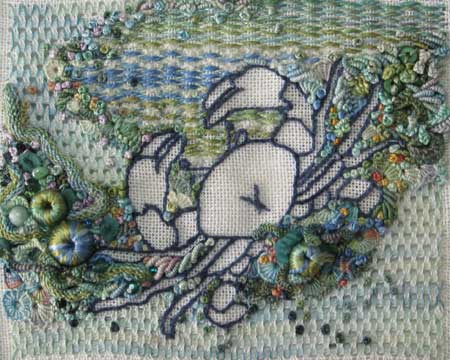 A good few of my designs are actually based on the idea of filling the background with stitching while leaving the main motif blank just s you do in Assisi. In fact I got the idea after looking at Assisi. Here is an example. 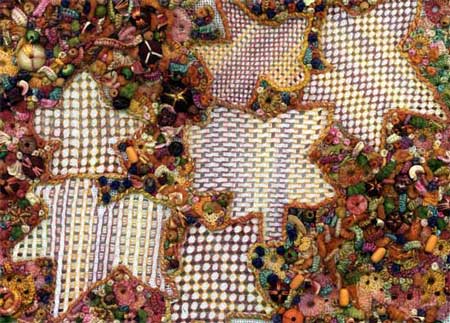 Have fun with this months challenge. I know it is more of a design challenge but last month was a technical challenge and we have to have variety!

I have established a Flickr group for those who want to use it. The name is Stitchexplorer

How to participate in the stitch explorer challenge

Stitch some samples that push this embroidery style

Blog it or put images somewhere online where people can see them. If you use flickr send them to the Stitchexplorer group

Come back to this post and leave a comment with your web address in it so that people can visit and see what you have done.