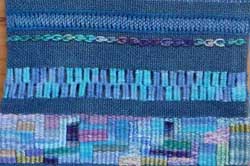 I have come to another join in the For Love of Stitching band sampler. It feels like I was documenting the last band for ever and day. I hope it was not too boring.

As I explained when I introduced the last piece most of the stitches worked in the last section were to demonstrate stitches for The Young Stitchers group at the local branch of the Embroiderers Guild which I co-ordinated at the time. I hope the continual basic stitch day after day did not put people off.

I thought I would show you an over all picture so that I can set thing the coming bands in context a little.

I am going to talk about the next two sections of the sampler that I will document band by band in the next few weeks.

The next section is very small and is more of a doodle cloth stitched in February 1998. When I pieced the sampler together I decided to include it  as it has a few drawn thread stitches and some needle weaving on it.  Just a reminder for those who have not swung by the  post that introduced this series this sampler is made up of a series of smaller samplers pieced together.

At the time, I decided rather than file it away in a binder in one of those plastic pockets never to see the light of day again, I would include it as a sample of something that was just picked up, fiddled with, stitched a bit, not fussed over but still a worthwhile exercise.

The piece is worked on a scrap of furnishing fabric that I discovered in a swatch book from a soft furnishing and curtain shop here in Canberra. It was a bone colour and I dyed the fabric on one of those dyeing days when everything gets tipped into the pot.

The section after that is amore experimental piece which hopefully people will enjoy.

At this stage I was becoming more interested in using samplers as tools to record what I did.

Although it does not look like it in many ways it was during the working of this sampler that I consolidated some ideas about using band samplers as something to  reference.

That is all I can think to write about. If you have any questions feel free to leave a comment. I will do my best to answer.

All posts in the series are in the category  the Love of Stitching Band Sampler.