I managed to complete my February block for the Crazy Quilt Journal Project 2012 on the last day of the month. To be honest I did not think I would meet the deadline.

As February closes summer begins to shift towards Autumn and I took my colour scheme from that mood. Also during the month we had some time in Sydney. I picked up a little charm while there and added it to the block. 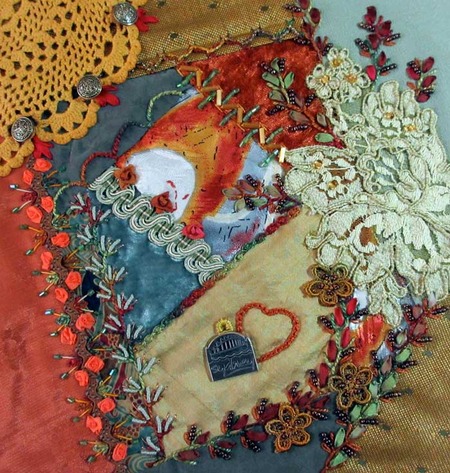 Also on this block I used some sample threads I received from Theadworx. I was really impressed with thier overdyed perle #5 and #8. Also they produce a range of overdyed Kreinik metallic braid that is just great to work with.

They are difficult to photograph and look much better than this! 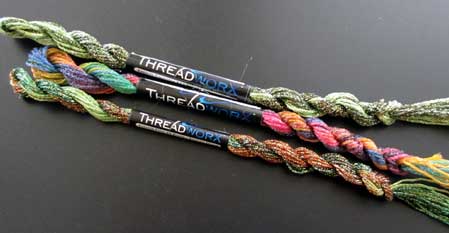 Often metallic threads will shred and carry on, creating shabby tatty work.  So when crazy quilters use these types of threads they are worked with a gentle hand. However but on this block I worked tied herringbone using this metallic thread and had no trouble with it at all. In fact I ended up treating it more or less like normal thread which for a metallic is saying something! It really handled the constant looping motion of this stitch well. The seam I am talking about it in the top middle of the block.

All over the block I used Threadworx overdyed perle thread and once again it performed well. I liked the strong colour too. So check out the Threadworx website.

I am not associated with Theadworx in any way, nor am I being paid for a review or recommendation but they did send me some samples of their range. I will be purchasing more of thier threads because I was so impressed with this thread.

If you click on the image you will see a larger view of the block.