Well I have been browsing around and thought I would share with you a dash of my morning inspiration and track how the ideas developed.

I started off at Loretta Holzberger’s site Dimensional Embroidery which hosts her designs and a number of tutorials online. On Loretta Holzberger’s site there are instructions for Brazilian Embroidery which cover the key stitches including Loose cast on stitch which is a stitch I know but I have not seen directions published for it online before. So that being fresh content online made me explore the site further.
I discovered another article which covers the principals of needleace including wired needlelace. In the stumpwork section basics of wiring are covered.

These are all interesting articles but it was the final piece that triggered my interest most as it covered an Austrian craft called Klosterarbeit. In Malta similar work is done known as Ganutell. Loretta Holzberger calls the pieces created wire and floss flowers because that is what they are. These are 3 dimensional floral sprays made of fine wire wrapped with floss. Take a look and you will understand why seeing this made me pull up google to see what else was to be found online about this craft form. 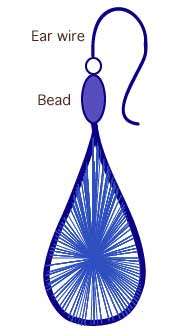 I found out that Irina Astratenko has published details on this interesting woven or wrapped technique found in Maltese needlework.

Take a look at what I mean as I immediately thought of turning the petals upside down and attaching them to an ear wire to make an earring. I did a rough sketch in Adobe Illustrator to show you what I mean. The wires would have to be tucked into a bead at the top but I am sure it would work. It is just an idea. I am sure I am not going to ever get around to trying it but if someone else wants to try it I would love to hear about it.

Well I think one thing has lead to another enough for morning. We have a get together of crazy quilters this weekend and I have to sort out what I am going to take to the show and tell…