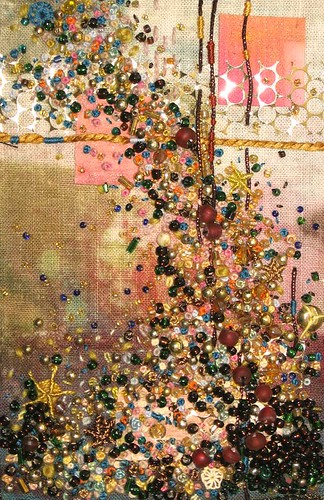 Yesterday afternoon I finished the fiber postcard for the 6 x 4 lives challenge. As I said last week is more a design exercise than anything else. It is also an excuse to experiment a little with the sequin waste. I went a bit over board on the beading perhaps but it has a bit more zest in life. The photo makes it look a little flat.

While there I poked around to see what else has been done this month.

Emmy Schoonbeek of Cramzy has her challenge card on the flickr site but while you are on her blog you might like to read about a fundraiser organised by the Swiss Quilters Guild. They are calling for support, inviting Quilters and Textile Artists around the world to donate Fiber Art Postcards for Fiber Art Cards for Women after Breast Cancer.

Gunnel Svensson also joined in and published images of her postcards.

As I reported last week other people who have created fabric postcards this month are cowgirl53 who has printed a photograph on to fabric, Ampy, Maureen of Tangled threads and Kim of Skybellarts.

Maureen of Kenmaurs corner is running a series featuring a fabric postcard a day. Maureen has been highlighting some interesting cards so do not miss the series.

The 6 x 4 lives challenge is not swap challenge but aims to produce a fiber postcard at least once a month that records what you have been exploring, doing, or thinking about. The format of a fabric postcard can be used to explore telling stories visually, or experimenting with techniques.

Thanks everyone for the comments left about the 100 details for 100 days series. I am so pleased to know that so many people enjoyed it. Annie Whitsed of Annies Crazy World is continuing on as she wants to post details of her work as she documents it.

After my post yesterday about Ganutell Mary Anne of Magpies Mumblings left a comment to say that earrings made using this technique work, and not only that, someone else has thought of the idea too.

After my announcement that I am going on a teaching tour of the states some Aussies have contacted me about travelling here. I am happy to travel to teach as earlier this year I gave up waged work in order to work more in the studio so if you are interested in organising something just drop me an email. Of course there is also my online classes. Develop a Personal Library of Stitches and Encrusted Crazy Quilting .

People asked me to post more work in progress images. Part of the problem is that I get wrapped in stitching and forget to take a photos! I am going to make an effort to do this.  I hope to have a stitching weekend and  start my Christmas gift sewing. I can blog it because it is for someone who is not really on the internet too much.

As many Aussies know the National retreat this year had to be cancelled. I think 2 home loan interest hikes and petrol price increases meant that many households did not have the spare cash. However, we are having a small get together for those die hards that simply could not bare the thought of not meeting up and it is this weekend.