This is the first in a series of articles illustrating the development of my hand embroidered file cover from its start in my studio journal to its design, and then sharing how I stitched the design and the design decisions made along the way. 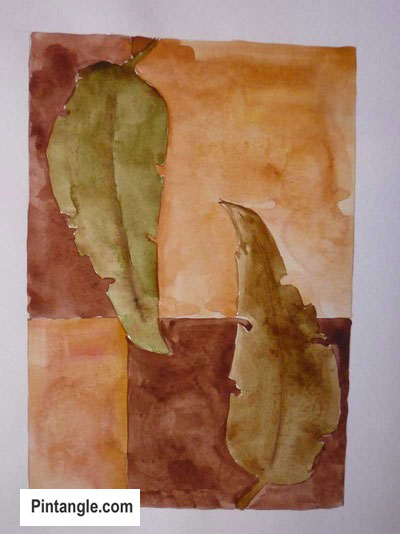 The source of the design

The idea for this project started because at the end of our street, we have a green belt that is being re-planted after the bush fires that hit Canberra in 2003. I had thought I might explore working a few little pieces associated with that area of land as it had seen some dramatic changes. The topic of the fires, the environment, global warming, the devastation, then the regrowth and the changes associated with the Canberra fires is large enough to be a series of works. I was not sure I wanted to work a huge series of works but was exploring ideas in my studio journal. I decided I wanted to take it a step further and use my needle to apply the ideas in fabric and thread. Rather than launch into a series of full wall pieces I decided I would first work a sample that could become a file cover. It was a way of testing some of the the ideas I had without commiting to a huge long process of a big work. 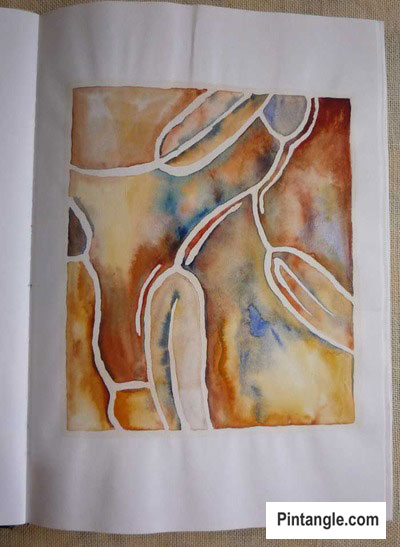 I started exploring imagery and patterns drawing summer grasses but after a long period of faffing about with these (not shown) I decided summer grasses did not really catch the mood of what I was thinking about. The fires were not mere little grass fires. They were  forests ablaze  that whipped up such heat they became a firestorm ripping through the suburbs taking nearly 500 homes with it. I decided to focus on a few remaining trees that survived the fires. These are gum trees. At first I had an aversion to using such a cliche of an Australian gum leaf but the more I played with it the more I felt they spoke of Australian summers, heat and in this case survival.
I started with just a few individual leaves then after working about 20 designs the leaf shapes moved together producing the page above. When I saw it I decided that would be the pattern.  I liked the composition so decided to use it. 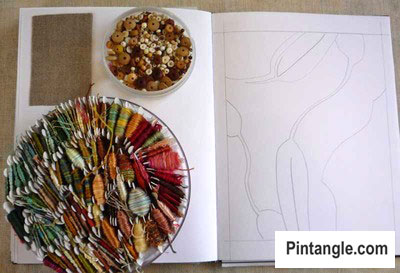 I traced the page to produce a line drawing that I could use as a pattern. Next I sorted out the colour scheme and threads. I chose chunky threads as I did not want delicate stitching.  I did choose some cotton perle #5 and #8 but I also chose linen and cotton abroder threads which are dull. They do not have a sheen. I wanted earthy summer colours that felt natural, not threads that had a high sheen to them as they felt too decorative.

I then chose beads that were made of wood and shell. They were unpolished and in some cases a bit rough as once again I wanted a natural feel to the piece. I then scaled up the drawing so it would be the right size for a file cover. I used a window as light box to transfer the design to fabric ( a tutorial on how to do this is here)  and started to stitch. 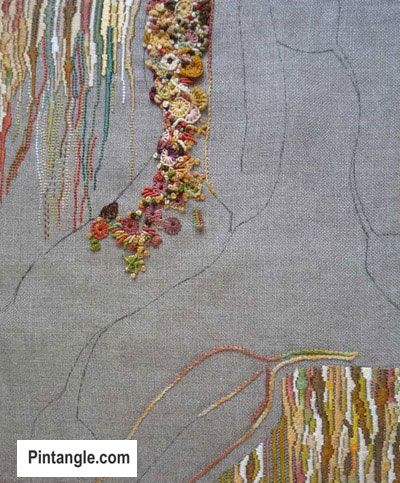 The fabric I chose is a 26 count linen that is a jute fawn type of colour which will sit well the natural theme of the design which is of gum leaves. The colour is nicer in life than in the photograph.

As you can see I have started to stitch. The top left and bottom right hand areas are stitched using Satin stitch, Padded Satin Stitch. The fine lines you can see are made with Back Stitch, and Running Stitch. I have started to outline the top leaf in Stem Stitch and bottom leaf is outlined in a heavier linear stitch, whipped chain stitch. The textured surface stitches I am using are Bullion knots, French knots, Buttonhole wheels, Buttonhole Wheel Cups and Cast-on stitch. All of these stitches you can find in my Stitch Dictionary. 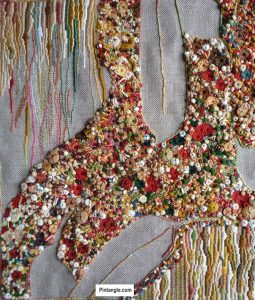 Click on the image to see a large version of the finished project.
From Studio Journal Design to Embroidery posts in the series are.

Don’ want to miss out ? Follow Pintangle and have it delivered to your inbox

You can have Pintangle delivered to your inbox by using the follow feature in the sidebar. Just enter your email address, and when you get the confirmation email make sure you say yes and you are all set! If you are on a mobile or tablet you will need to scroll to the bottom to find the follow feature. 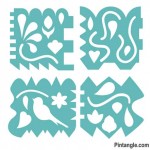 Have you seen my Stitchers templates?

As a stitcher who loves crazy quilting and embroidery I designed these templates with other stitchers in mind. With my Stitchers Templates you can create hundreds of different patterns to embroider on your stitching and crazy quilting projects. They are easy to use, totally clear so you can position them easily and they are compact in your sewing box.