Last night, at the Albert Hall in Canberra, the Embroiderers’ Guild ACT annual exhibition was opened by Dr Brendan Nelson Director of the Australian War Memorial and former Defence Minister. 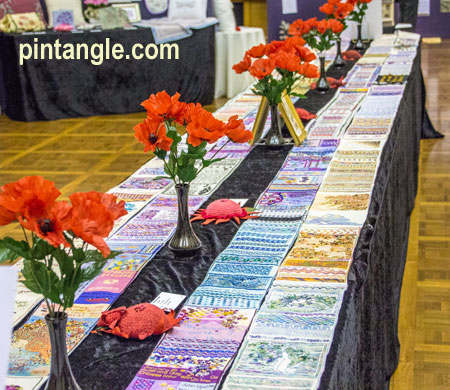 This year I was excited as I was invited to exhibit my band sampler. At nearly 100 feet long it ran down the centre of the hall. We used a serpentine fold that ran the length of a series of tables to display it. For readers who have not encountered my band sampler before you can read about it here. 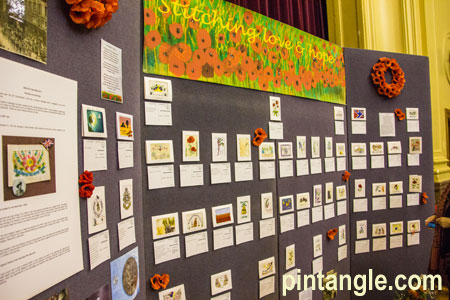 What are the poppies doing all over the place? Well they tie into the exhibition theme . The Creative Challenge this year was: Stitching Love and Hope. Inspired by silk postcards from World War One, the exhibit ties in with the WW1 commemoration. The challenge was to re-interpret a Silk postcard. Embroidered silk postcards, known among collectors as simply Silks were popular from 1900 to 1920. The peak of production was during WW1 when it’s estimated that around 10 million were produced. Servicemen serving on the Western Front purchased these cards in Paris on their way through to the trenches. Many were posted home to Australia. You can read more about them on the Embroiderers’ Guild ACT website here.

The 2014 Annual Exhibition will be held from 19 to 21 September at the Albert Hall, Yarralumla, Canberra, Australia Capital Territory open from 10am to 4pm.