Raised Herringbone Band is one of those stitches you look at in a stitch dictionary but don’t get around to trying, then when you do, you wonder why it took so long to explore! Raised Herringbone Band built up in layers. It looks complex but in fact is relatively simple. First a layer of Satin stitch then a line of herringbone that is laced. You can change threads and you can also vary  the width of the band. Also you can work the band on a gentle curve.  It is a very effective border and quite complete in itself.

It is interesting to work this stitch in different threads. I did a sample with a foundation of gold thread which looked great but it impossible to photograph!

How to work Raised Herringbone Band

The sample has the foundation row worked in perle 8, the herringbone worked using 6 threads of stranded cotton floss and it is laced with a chenille thread

First lay down a band of Satin stitch. Satin stitch is in my stitch dictionary if you need to know how to work it follow the link to a tutorial. 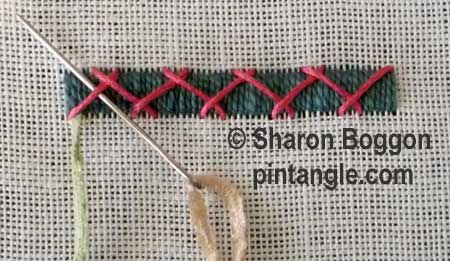 Lace the herringbone foundation stitches as shown in the illustration. 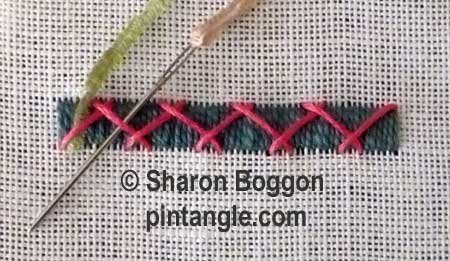 Repeat this motion under, up and over and under again type motion along the line of Satin Stitch. 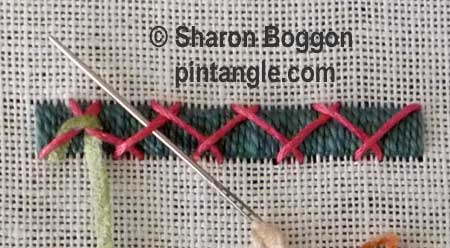 My tip is dont pull too tight  just relax and lace the threads.

I hope you enjoy Raised Herringbone Band. As I say experiment with different threads particularly at the lacing phase as this stitch  lends itself to lots of interesting textures and variety.

Follow Pintangle and have it delivered to your inbox
You can have Pintangle delivered to your inbox by using the follow feature in the sidebar. Just enter your email address, and when you get the confirmation email make sure you say yes and you are all set!
If you are on a mobile or tablet you will need to scroll to the bottom to find the follow feature.