Make a cuppa folks as I have a bit of news. In just two weeks we are taking a trip of a lifetime. Further down in this post I tell you about what will happen to stencils sales, classes and this blog while I am away but first indulge me and let me tell you where I am going!

We leave Australia via Sydney then fly to Korea stopping in Seoul for 3 days before going to Paris. The flight between Australia and Europe is long between 22-26 hours and when you arrive your body clock is totally functioning in reverse. If we can we stop over for a few days midway between flights and then we are not so wrecked for the first week.

Next we go to Paris for a month. That is not a typo we have rented an apartment as it is a city I have always wanted to see. The last time I was there I stayed for 5 days and it simply is not enough time to see a place. I want to get past the rush and see this, rush  and see that mentality.

I want a taste of travelling at a more realistic pace, a slower more considered pace as Paris is a city that has a lot to offer. Jerry (my husband) wants to do some photography and I am going to take my sketchbook. I have no idea if I will chicken out when I get to Paris. It is pretty brave to draw in public anywhere but to draw in one of the great Art cities of the world feels even more intimidating! I do want to do some drawing while I travel and the goal is serious one. Let’s just say to sketch in Paris is on my bucket list but now I have the chance to do it, I am feeling a little intimidated!

Over the years I have always kept a journal – daily. Much designing has gone in them but not sketching. The two are different. My drawing skills, the old fashioned, be still, observe and create a representation of what is seen is something I am very rusty at. So for the last 6 months or so I have been drawing more. I did not want to inflict my regular readers with my posts about this so to track my skill development last month I started a separate blog as I know some fiber folks want textiles and textiles only on Pintangle. 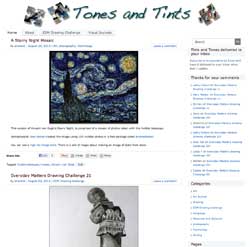 Tones and Tints is written purely in order to take time to think, reflect and record impressions about what ever topic has attracted my attention. It is about the visual arts and anything that catches my eye. Some readers here may like to visit it.

After our month in Paris we will be going to stay in another apartment in Arles in the South of France. We will be there for just over a week. We will hire a car for a few days and tootle around as that area has some great roman ruins and nothing sparks my imagination more than a good ruin!

Next we catch the train back to Paris and on via the tunnel to London. London is a wonderful city we too were fortunate to live there for 12 months in the 90s. We will be staying the Covent Garden area for a week before catching a train to Salisbury where we will stay in a bed and breakfast in the street behind the cathedral so hopefully a bit more sketching will go there too!

Plans are to hire a car for a few days and see more than Stonehenge. We have visited stonehenge before, but it is part of complex of prehistoric sites in the area that I would like to see more of. In that week we will also see Bath. We have been to Bath and seen the highlights but want to return and investigate more of the history of the place and draw it too of course!

Next after our week in Salisbury and surrounding districts we will catch a train back to London for our last week in the UK taking us up to the first weekend in November. Jerry is a steam car buff and he wants to see the London to Brighton steam car rally.
Then it will be time to fly back to Australia but not without stopping for 3 days in Tokyo on the way home.

What does this mean for supply of my stencils and my classes?
I will not be taking on any more classes this year. Since we get back the second week in November any class started then clashes with the holiday season in December.

As of next week I will not be taking any more orders for my stencils until I return in mid November. I will remove all paypal buttons – put notices everywhere on the blog and hopefully people will understand as I am likely to have irregular internet contact during the trip.

What does this gad about lifestyle mean for this blog?

Basically this block of time I am away will be just over 2 months. I will prewrite most posts. I aim to have at least 6 weeks of TAST prewritten so people wont miss out.

While travelling I will write about textile related travels here on Pintangle. I know that too many holiday pics on a blog can become a bit boring for some people. The first couple are interesting but after that it’s not. Pintangle will stay on topic – about textiles. Tones and Tints is my new ‘personal’ indulgence, I will probably write about my travels and share my drawings on Tones and tints.

Our daughter will look after the house while we are away. So from next week I will be in topsy turvy mode! I am very much looking forward to the break in routine as I need a holiday.